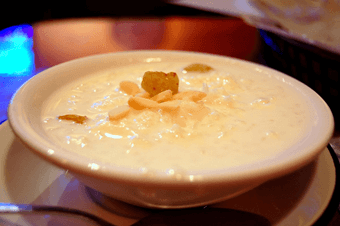 Kheer or Firni is a pudding made by boiling milk and sugar with one of the following: rice, broken wheat, tapioca, vermicelli, or sweet corn. It is flavoured with cardamom, raisins, saffron, cashews, pistachios, almonds or other dry fruits and nuts. It is typically served during a meal or as a dessert. It also has many varieties which are not as thick as Kheer, they are known as meetha bhaat, payasam, payasa, dudhpak, etc. It is typically served during a meal or after as dessert.

The first mention of kheer, which historians say was derived from the Sanksrit word kshirika (meaning a dish prepared with milk), is found in the fourteenth century Padmavat of Gujarat, not as a rice pudding but a sweet preparation of jowar and milk. Rice was known to the Romans, and possibly introduced to Europe as a food crop, dating as early as the 8th or 10th Century AD, and so the recipe for the popular English rice pudding is believed by some to be descended from kheer. We have tried out this recipe with our friend Rohan.